The Wonders of Mummy’s Milk 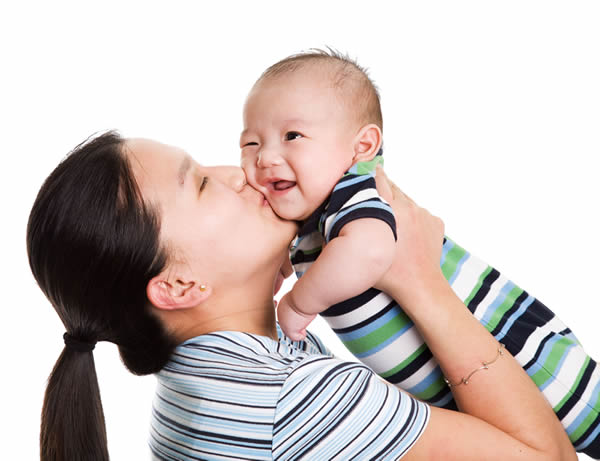 Experts agree that breastfeeding is the best source of nourishment for infants and young children.  In fact, the World Health Organization recommends mothers to breastfeed babies exclusively for 6 months and continue up to 2 years of age in order to provide the best nourishment and protection for babies.

The Benefits of Breastfeeding

Breastfeeding your baby is the first line of defence against infection.

Breast milk contains all the major nutrients your baby needs for his growth and development. Additionally, it often contains helpful substances such as antibodies and enzymes (which are not present in infant formula) that protects baby from diseases and enables your baby to digest major nutrients better.

Exclusive breastfeeding means that baby is given only breast milk. No water, food or other types of drinks are necessary. Exclusively breastfed babies receive the greatest health benefits from breast milk. Other food or drinks, even water, can interfere with breastfeeding because it fills baby up so he nurses less. Babies need the nutrition and calories in breast milk to grow. Water, for instance, has none of these.

How Your Body Prepares for Breastfeeding

For many women, the first signs that they are pregnant may be the changes to their breasts. They may experience tenderness, swelling and the darkening of nipples and areolas (the circle of skin around the nipples), all signs that the body is getting ready to supply milk to the coming baby.

The small bumps on the areola enlarge in readiness to produce a natural oil that will clean, lubricate and protect the nipple during pregnancy and breastfeeding. This oil contains a bacteria-killing enzyme, and makes breast creams unnecessary. 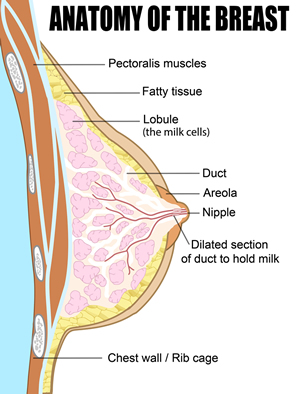 As you can see from the top diagram, the duct that holds the milk is just below the areola. Hence, it is important to latch baby on the areola to withdraw as much milk as possible, not on the nipple which is just an opening for the milk to flow out (it has 15-20 openings).

When baby suckles, the stimulation will trigger the brain to release a hormone called prolactin, which causes the milk cells in the breast to produce milk.  Hence, the earlier and the more frequent a baby suckles, the faster milk will be produced.

Another hormone called oxytocin is also released and it causes the muscles surrounding the milk cells to squeeze the milk out and flow to the milk ducts.  This is called the letdown reflex, during which milk flows out of the nipple. It also helps the mother relax. Let down may take several minutes, especially when the mother is tired, in pain or stressed.

If the breasts are not emptied frequently, they can stop producing milk. Breast size has nothing to do with milk production. The more you nurse, the more milk is produced.

The composition of breast milk is very unique in the sense that it fulfils the babies’ needs according to their stages of development. It changes from colostrum to transition milk to mature milk.

This “first milk” is present before birth and up to a week after baby is born. It’s thick and sticky with a colour that varies from pale cream to orange. This easily-digested milk is rich in protein, vitamins,  minerals and antibodies for protection, thus known as “the first immunisation”. It encourages early bowel movement, which helps to minimise neonatal jaundice. No wonder colostrum is sometimes referred to as “liquid gold”.

This creamy milk is produced, following colostrum, for approximately two weeks. The quantity of milk increases, and composition changes. There is less proteins and antibodies in this milk, but more fat, lactose and water, hence it may look more watery than normal milk but rest assured, it is enough to fulfil the requirements of the newborn at this stage without overloading their immature organs. At this stage, it’s important to nurse frequently to avoid engorgement.

This final milk is produced near the end of the second week after childbirth. About 90% is water, necessary to maintain the hydration of the infant; while 10% comprises carbohydrates, proteins and fats, in the right proportion, all necessary for both growth and energy, as well as antibodies, growth factors and enzymes.

Mature milk consists of foremilk and hindmilk. Foremilk flows at the start of feeding and looks like barley water. It contains water, vitamins and protein. Hindmilk flows after the initial letdown and is bluish white. It contains high levels of fat and is necessary for weight gain.

As a particular feeding progresses, the fat-content of the milk increases. The amount of time it takes to receive his fill of the higher-fat milk at the end of the feeding varies from baby to baby. Therefore, it is important NOT to switch breasts while baby is actively nursing. Allow baby to feed on one breast at a time instead of changing breast during feeding, so that he will be able to get both the fore and hind milk.

Breast milk is more easily digested than formula milk, so baby will need to be breastfed more often than if he were formula fed.

For further information on infant and child nutrition, please refer to